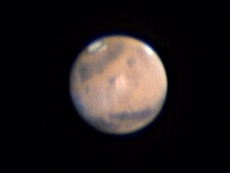 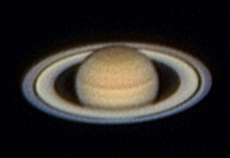 Imagine: "Three billion (3000000000) years ago in the outer atmosphere of a star similar to the sun. Atoms excited by the nuclear reactions in the stars interior send out light also called photons when described as a particles. The photons travels through space to a nearby planet orbiting the star, interacts with the surface of a species of an alien life form and are reflected back into space towards Earth. After a journey over three billion Earth years the photons pass through our solar system, enters Earth atmosphere and are caught in the telescope pointed at the sky from my backyard. Here, the photons finally meets their fate being registered by the silicon pixels of the CCD camera and converted to an electrical signal later to become part the image below"
This is a fascinating thought experiment! and part of what makes astro imaging a facinating experience. At the time these photons were sent off, Earth was about to spark the development of life as cyanobacteria started to produce oxygen and caused dramatic changes in Earths atmosphere. In the last blink of an eye in comparison to the time travel of our thought experiment photons, Earth has become inhabited by intelligent life capable of reflecting over and exploring the universe around us. So get out there under a dark night sky and reflect over space and our own existence ;).